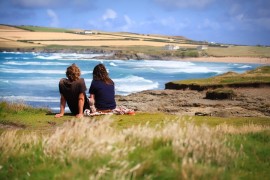 The state of the footpaths in Cornwall vary immensely.

Walking around the Lizard Peninsular recently I’ve been made aware of the sorry state of some of our footpaths. Although the coastal path is well maintained and signposted, inland the situation is very different. The difficulties encountered when using inland footpaths include:

It is quite likely that the same state of affairs exists elsewhere in Cornwall. It is imperative to let Cornwall Council know about problems relating to footpaths, as well as to encourage farmers and landowners to accept that a public footpath is just that – a path that can be followed by the public, and that such paths must be reasonably safe. There is a website that can be used to inform Cornwall Council of any footpath that is in a dilapidated condition: www.cornwall.gov.uk – select Public Rights of Way and then the Path User Feedback Form. Alternatively, written reports can be sent to The Countryside Service, Cornwall Council, St. Clements Building, Old County Hall, Truro, TR1 3AY. The relevant phone number is: (01-872) 222 000.

Obviously walkers must respect the land that they walk across and be aware of the Country Code, but it is very disappointing when paths are impassable because of neglect or obstruction.

There are three designations for footpaths within the county – “gold”, “silver” and “bronze”, with “gold” receiving priority attention.  At the present time, Cornwall Council is focusing its attention to “gold” footpaths, which are basically those that form the South West Coast Path.  This means that paths designated as “silver” and “bronze” have to wait for remedial work to be undertaken – and sometimes this may take years.

As local authority funding for footpaths is likely to be reduced, it might be appropriate to tie farmers to an obligation to look after footpaths on their land, and to keep the paths safe and accessible at all times, in return for a full CAP payment.

Blocked paths can be reported to Cornwall Council using Section 130A of the Highways Act.  On receipt of such referrals, the Council are obliged to take immediate action to resolve the problem(s).

This entry was posted in News and Events and tagged footpaths. Bookmark the permalink.